Steve from Canada has just sent us some pictures of his latest creation. This one is fantastic!

Here’s what Steve had to say about it….

Hello everyone, meet Flash-Quattro.Â  That means “four flashes”.Â  I
chose the name because the 807 tube is very art deco and it made me
think of the 1930’s series ‘Flash Gordon’,Â Â  and there are four of them
hence the name,- simple!

This is the latest version of the ‘Book-shelf’ amp series, like the
Caterpillar and Firecracker amps, this one is long and lean.

Now about the amp, it’s a push-pull 807 putting out 40 watts per channel or so,Â  in tetrode.Â  Rectification is with a 5R4, but you can choose to use 5U4
or 5Y3.Â  All supply the amp with more or less voltage and will change
the personality of the sound a bit.Â  I like the 5R4 so that’s why it’s
there.Â  Input tubes are a trio set of 6SN7GTB’s.

The output transformers are those nice Seeburg units that have Ultra-linear taps, but as I mentioned, I connected them in tetrode because I prefer the
sound of tetrode.Â  These outputs have impedance taps for 1,4,8,16 ohms.Â  A selector switch on the back of the amp allows you to switch
impedances ‘on-the-fly’ so you can choose and compare the taps you like
for what ever speakers you’re using at that time.Â  There is no problem
using the 4 ohm tap on an 8 ohm speaker, it how it sounds to you.

The power transformer is a Lowrey unit and a plate voltage of 373 vdc.
Classic green jewel light and side toggle On/Off switch.Â  Painted by my
good friend Joel Luttrell, and having his signature touch, a flawless
mirage of firecracker red (yes the same red as used in the
‘Fire-Cracker’ amp) and ice-pearl sparkles.Â  Apparently a fly decided
to do the back-stoke in the final coat of clear, so Joel had to pluck
out the fly, buff, and add more coats of clear.Â  Knowing Joel, there’s
probably 10 or more coats of clear here!
Take a look….. 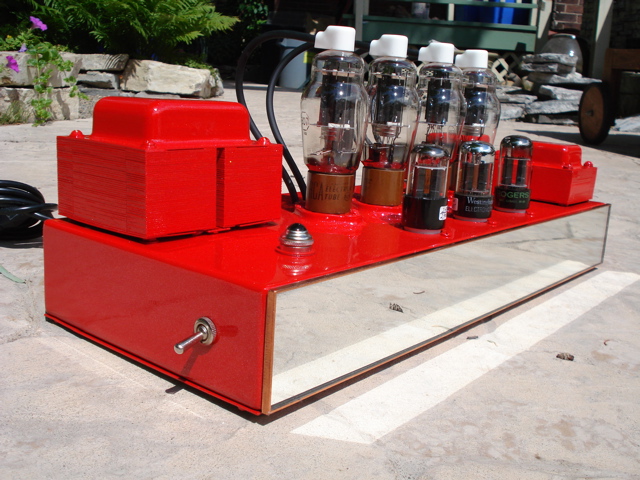 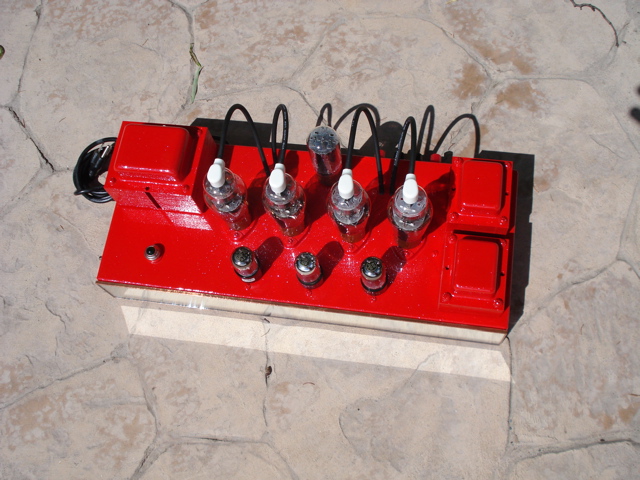 As always – thanks for sharing, Steve. We are amazed!