When you switch on your fan or light, chances are you also have a dimmer controller to control the speed of the fan or the intensity of the incandescent or LED light. Typically, dimmers are useful only where alternating currents are used, because they have components that allow only part of the waveform to reach the appliance. That means the appliance receives only part of the energy supplied and hence runs slower or glows dimly. Dimmers accomplish this AC waveform chopping or phase control with the help of two active components – a diac and a triac.

A diac is a bi-directional diode, equivalent to two zener diodes connected back-to-back. The diac is designed to break over at a specific voltage. When the voltage applied (in either polarity) to the diac is less than this break over voltage, the device continues in a high resistance state allowing only a minor leakage current.

As the applied voltage crosses the break over voltage (in either polarity), the diac starts conducting with a negative characteristic. That means, as break over occurs, the current flow increases and there is a corresponding voltage drop across the device. According to Ohm’s Law, an increase in current typically leads to a larger voltage drop, provided the resistance remains constant. However, since the diac shows a drop in voltage with increased current at break over, its resistance must have decreased. This is the reason for stating a diac exhibits negative resistance at break over.

The triac operates similar to two thyristors connected in reverse parallel but with their gates in common. Therefore, a triac can conduct in both directions when a voltage of either polarity is present across it and it has been triggered on by its gate terminal. The polarity of the gate pulse is immaterial for initiating conduction of a triac.

By controlling the gate pulse to occur at a specific position in the voltage waveform applied to the triac, it can be made to conduct for only a part of the entire cycle. This allows delivery of a fraction of the voltage to the appliance.

In a dimmer circuit, a diac is used to trigger the triac. Typically, a capacitor is allowed to charge via a variable resistance from the supplied AC voltage. As the capacitor charges through the resistor, the voltage on the capacitor rises until it reaches the breakdown voltage of the diac. The diac then conducts and triggers the triac, which, in turn, applies the remaining voltage of the cycle to the load/appliance. As the supply AC voltage crosses over, the triac switches off automatically, until again triggered by the diac.

Sometimes we come across some new parts and there is no accompanying information. We search high and low for a data sheet but occasionally we are not successful. 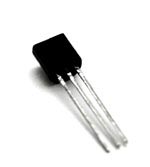 Do you know what it is? Do you have any specs for it? Let us know what you know and if we can verify the information, we’ll send you a $5.00 gift card to shop on our web site which is the best online store for electronic components.