A rotary switch is a kind of switch that has a rotating shaft attached to a terminal. That terminal is able to make or break a connection to one (or more) other terminals. Rotary switches may feature different switch positions that can be set by rotating the switch spindle in one or another direction. Some common examples where a rotary switch might be used is in a multi-speed fan or as a band selector on multi-band radios. Until the early 1970’s, rotary switches were used as channel selectors on TV receivers.

In general, rotary switches can be found where ever there is a need to control a large number of circuits covering a range of currents, voltages and power requirements. Currently, you will find rotary switches in these applications:

The construction and design of a rotary switch is centered around the center rotor. The rotor has a contact arm that projects out from its surface. Around the rotor are an array of terminals. These serve as the contact for the arm, or spoke. Since the switch has multiple layers, each layer permits the use of an additional pole. There is also a detent mechanism which will click into place as the switch is turned from one active position to another. The contact / sensor system and detent mechanism determine the number of possible switching combinations. 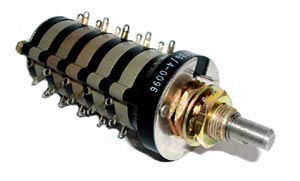 Above is an example of a Grayhill military rotary switch. You can see it has 5 decks. Each deck has 1 pole. Each pole has 9 positions. 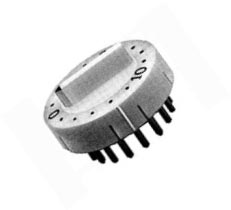