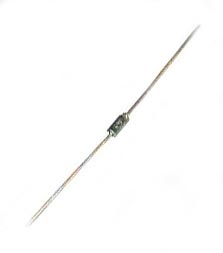 Diodes are an important part of todayâ€™s electronic components and are widely used for a number of applications. Accordingly, a large number of different types of diodes have been created to cater to their wide array of uses. The more popular types of diodes are described below.

Schottky Diodes: These diodes are made from a semiconductor to metal contact instead of semiconductor-semiconductor junction. This gives them a lower forward drop voltage as compared to pn junction diodes. They have a faster reverse recovery time and high switching speeds due to the low junction capacitance. They are used in voltage clamping applications and as low loss rectifiers.

LEDs (Light Emitting Diodes): These electronic components are formed from direct band gap semiconductors like gallium arsenide, and as the carriers cross the junction and recombine with the majority carriers, they emit photons. Infrared to ultraviolet wavelengths can be obtained depending upon the material used for making the LEDs. They are often used in signaling operations.

Varactor Diodes: These diodes are used as voltage controlled capacitors and have important applications in frequency locked loop and phase locked loops used in tuning circuits.

Avalanche diodes: These diodes are also used for conducting in the reverse direction once the reverse bias voltage increases the breakdown voltage. The reverse bias causes a wave of ionization, like an avalanche, and leads to a large current.

Tunnel diodes: These diodes have a negative resistance region of operation that is caused due to quantum tunneling. This allows for amplification of signals. These diodes offer most resistance to nuclear radiation.

Gunn Diodes: These diodes are similar to tunnel diodes except that they are made of different materials, like InP, GaAs, and exhibit negative differential resistance.

If you are just beginning to work with diodes, you might want to purchase a small amount of each type listed above. A good source for all diodes and other electronic components is West Florida Components.