Here are more questions we get asked a lot:
What is the positive (or negative) lead on an LED? How do you determine the polarity of an LED?

If you are talking about through hole LEDS, in most cases it’s pretty easy to determine the polarity. 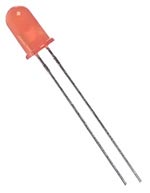 If the LED has two leads, one longer than the other,the longer lead is the postive (also known as the anode) lead.

If the LED has two leads with leads that are equal in length, you can look at the metal plate inside the LED. The smaller plate indicates the positive (anode) lead; the larger plate belongs to the negative (cathode) lead. Unfortunately, some jumbo LEDS have the plates reversed so this is not a fool-proof method.

If the LED has a flat area (on the plastic housing), the lead adjacent to the flat area is the negative (cathode) lead.

Of course, if you can find the datasheet for your LED, the pinout, along with all the other specs will be readily available on the datasheet.