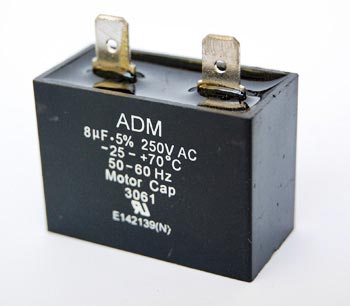 Motor Start Capacitors
The primary purpose of a motor start capacitor is to briefly increase the motor starting torque as well as to allow a motor to be cycled on and off very quickly. It operates in the circuit by staying active long enough to allow the motor to be brought to 3/4 of it’s full capacity. It is removed at that point by a switch in the circuit. You will find that the voltage rating is often one of these four: 125VAC, 165VAC, 250VAC, and 330VAC.

Operational information
Electric motors that are single phase require a capacitor for a second-phase winding. If you use the wrong motor run capacitor, the rotor may hesitate due to an uneven magnetic field. The hesitation may result in performance issues such as a noisy or overheated motor, increased energy consumption and general decreased performance.