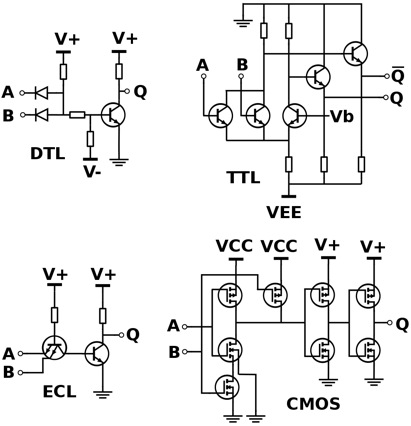 In the presence of different digital signals that need to be combined to make a logical decision, engineers use different types of digital logic gates. Usually, these gates have several inputs but a single digital output. Where a larger logic gate function or a sequential or combinational circuit is required, it is usual for individual logic gates to be connected together.

The difference in the two families depends on the type of transistors used in making these ICs. While ICs using the TTL logic make use of PNP and NPN type of Bipolar Junction Transistors, the CMOS logic uses JFET or complementary MOSFET type of Field Effect Transistors for their input as well as output circuits.

Apart from the TTL and CMOS technologies, other simpler types of Digital Logic Gates also exist. Some involve the use of diodes, resistors and transistors strung together as RTL or Resistor-Transistor logic gates. Other types are DTL or Diode-Transistor logic and ECL or Emitter-Coupled logic. However, these are far less common compared to the popular TTL and CMOS family, owing to the lower power consumption and heat dissipation of the latter types.

The most modern level of integration, representing the increasing complexity of modern digital circuits, is the Systems-on-Chip or SOC. Here, a single piece of silicon forms the base for individual components such as IO logic, peripherals, memory and the microprocessor. This represents a complete electronic system within the individual single chip.

The Digital Logic Gate forms the basic building block for construction of the entire field of digital electronic circuits and all microprocessor based systems. Digital Logic Gates fundamentally perform logical operations such as AND, OR and NOT on binary numbers represented by digital voltage signals.

The digital logic design recognizes only two voltage levels or states. These are generally referred to as the True, High or Logic “1” and False, Low or Logic “0” states. In Boolean algebra and in standard truth tables, the digits “1” and “0” represent the two states. In terms of voltages, digital logic systems typically use a “Positive Logic”. Here, the level “0” is represented by 0V or ground potential and a higher voltage such as 1.8V or 3.3V or 5.0V represents level “1”. 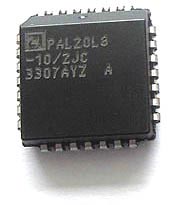 TTL or Transistor-Transistor Logic is a type of digital circuit that is made from BJT or bipolar junction transistor along with resistors. Both the amplifying function and the logic gating function are carried out through transistors, thus the name transistor-transistor logic.

TTL is used for many applications like industrial controls, computers consumer electronics, test equipment, synthesizers and more. The TTL designation is also used in some places to imply â€˜compatible logic levelsâ€™ even if they are not directly associated with transistor transistor logic circuits.

James Buie invented the Transistor Transistor Logic in 1961 and the first Transistor-Transistor Logic devices were made in 1963 in Sylvania. These devices were called the â€œSylvania Universal High-Level Logic familyâ€ and were used within controls for the US Phoenix missile. In 1964 Texas Instruments produced ICs of 5400 series and later on, the 7400 series which made the Transistor-transistor Logic devices popular amongst electronic system designers. The 7400 series went on to become the industry standard. Many companies like AMD, Motorola, Intel, Fairchild, Siemens, National Semiconductor made compatible parts.

The TTL circuits were low cost which made them highly practical for using digital techniques in tasks which were earlier done through analog methods. One of the first computers that was built, in 1971, made use of the transistor transistor logic instead of a microprocessor chip which at that point of time was not available. With time incremental improvements in power consumption and speed were made, and the last popular series was the 74AS/ALS Advanced Schottky was made available in 1985.