Your source for electronic parts and supplies
866-342-2003
US orders over $50 get
FREE SHIPPING
use promotion code FREESHIP50
Toll Free (US): 866-342-2003
Home > Blog > West Florida Components in the community making LED Throwies
Written by: Jack 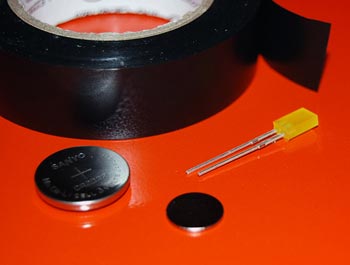 West Florida Components was recently invited to participate in a science experiments fair held in conjunction with the USF Education Department.

Each business staffed a booth where elementary school aged kids along with their families could conduct science experiments. The community event was an opportunity for families to enjoy and see the benefits of science in a fun atmosphere. The West Florida Components station was one of about 18 stations at which participants could interact and have fun with science. The event met a significant need identified at the national, state and local levels which is to increase the scientific literacy of students as a way to improve the local, state and global competitive status of our communities and our country.

The staff from West Florida Components made LED Throwies with the fair attendees. Each family member was given an LED, a 3V battery, a magnet and some tape to put their LED Throwie together. Once the Throwies were assembled, they could toss their Throwie at a metal board to earn points. The families learned the science behind the Throwie and were given additional LEDS to take home to so they could rebuild their throwies and experiment further.

If you’d like the instructions to make the LED Throwies, you can visit our web site where we give full instructions with pictures. 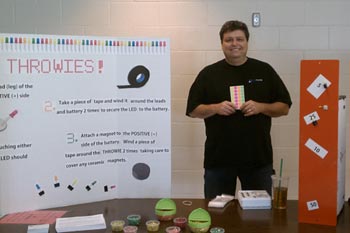